Ice cream, America’s favorite treat, has been around for a very long time. It is believed that some form of ice cream dates back to 200 B.C. Folklore has it that in the 1st Century, Roman Emperor Nero ordered his slaves to bring ice from the mountains to make his iced mixture with fruit topping.

Another form of ice cream was made by King Tang of China (A. D. 618-97). He combined ice and milk. From China ice cream was brought to Europe when, in the 1200’s Marco Polo had brought an ice cream sorbet recipe back with him to Europe from the Far East. The recipe called for the ingredients snow and milk. Ice cream was later imported from Europe to the United States where it was served by Presidents George Washington and Thomas Jefferson to their guests. 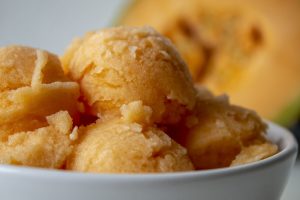 In New York City, in 1776, the first ice cream parlor was opened. The word ice cream was started by the American Colonists. They first called it “iced” cream and it was later shortened to “ice” cream. In 1777 Philip Lenzi, a confectioner, placed the first newspaper advertisement for ice cream in the New York Gazette. This was the beginning of America’s favorite treat!

When First Lady Dolly Madison was in the white house from 1809 to 1817, she served ice cream to guests. Ice cream was even served to immigrants as part of their meal when they arrived at Ellis Island.

The hand crank ice cream maker or freezer was invented in 1846 by Nancy Johnson. Today, ice cream is still made using the basic method of the hand-crank ice cream freezer. In 1848 a similar ice cream freezer, the Johnson Patent Ice-Cream Freezer was patented. By 1850 ice cream had become a popular treat. It wasn’t until 1851 that Jacob Fussell’s Baltimore Company began to manufacture and market ice cream commercially.

It isn’t clear who or when someone realized that mixing the cream in a small pewter pot inside of a larger pot filled with salt mixed with ice would lower the temperature of the ingredients. The wooden freezer bucket and paddles would open the way for the larger-scale manufacture of ice cream. Historians disagree on when the ice cream cone was invented. It has been said that the ice cream cone was invented in St. Louis, Missouri in 1904 when on July 23 Charles E. Minches thought of making a pastry cone and filled it with two ice cream scoops. The ice cream cone first appeared at the St. Louis World’s Fair later in the year where, historians believe, there were more than 50 ice cream cone vendors. 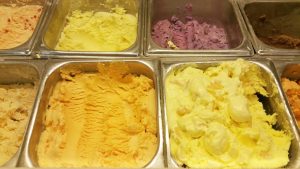 Historians also believe that before the 1904 St. Louis World’s Fair, metal and paper cones were being used. England was also already selling edible ice cream cones. Another theory is that prior to the 1904 World’s Fair, an ice cream vendor from New York City had grown tired of customers pilfering his serving dishes, so he invented an ice cream cone in 1896.

In 1926 Clarence Vogt came up with a process of continuously freezing ice cream for the commercial manufacturing of ice cream. By the 1930’s ice cream had a huge increase in popularity and many flavors of ice cream and sherbets had become available.

There there is Roll Ice Cream, read about it here