What Is Roll Ice Cream

The simplest description would be to say, that they are a handmade dessert created by pouring an Ice Cream Base on a cold plate. Sp, you will then typically add fruit, candy and other ingredients on surface.

Ice Cream Rolls have been around since 2009 and were only made in Thailand because it wasn’t popular then and it was made by only mixing a few ingredients together with fruits and candies. Which is how they got the alias Thai Ice Cream. This type of Ice Cream was sold by only a few vendors even because it was not popular at the time. It was after a few years when Rolled Ice Cream started becoming popular in countries outside of Thailand.

Around 2011-2012 they started making waves in every country around the world. Malaysia and Cambodia were among the first countries to adopt the Rolled Ice Cream trend. Moreover, it was in 2015 it went viral around the globe

This attractive. decadent,  mouth-watering, artistic, dessert has been around for a decade. Its debut in North America is just about half of a decade.

This is the beauty in the product. It tastes exactly how you, the consumer, wants it too.

You create the Rolled Ice Cream you want to eat.

Do you want it filled with chocolate; chocolate syrup, cake, cookies, chips and then some coffee? So, you can definitely have that freshly made in front of your eyes in under 5 minutes.

Even though it bears some similarities to Cold Stone There are some key differences. Cold Stone used pre-made Ice Cream and just added the inclusions. However, with Rolled Ice Cream everything is made before your eyes. 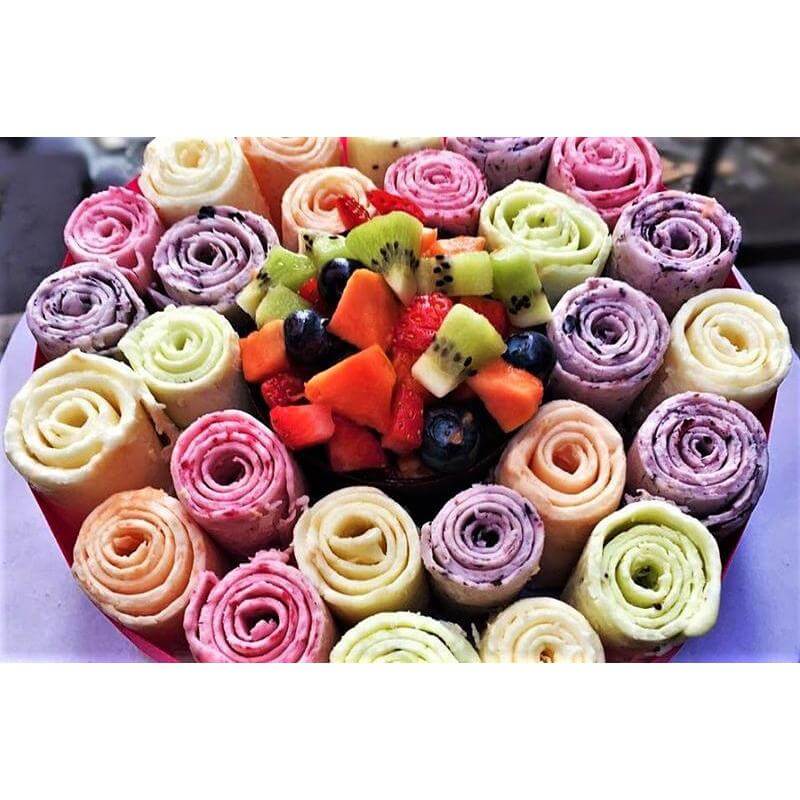 How is Rolled Ice Cream made using a  machine?

The pre-made base is poured on the sub zero pan. This base is usually suited to your individual requirement. They can be vegan, sugar free, dairy free, kosher or regular.

The artisan will then add the ingredients necessary to create the recipes such as nuts, chocolate, fruits etc. into the Ice Cream base.

Then the “artist” uses two stainless steel spatulas/scrapers to combine and stir the mixture on the pan. So, the constant stirring and combining of the mixture on the machine at subzero temperatures are how the Rolled Ice Cream is made.

The artist keeps mixing and stirring it and then when the Ice Cream becomes less malleable and a scoop is created. So, the completed mixture is now spread out thinly on the pan and we begin to roll. Moreover, the rolls are formed by angling the scraper at a 45-degree angle.

This entire technique/process can be completed as quickly as 45 seconds or can go as long as 2-3 minutes based on how complex creation is being made.

How are they served?

Most stores serve Rolled Ice Cream in a cup but there are many others ways to have Ice cream. Find a Rolled Ice Cream Store close to you by checking this link and find out how they serve theirs.

You can try Taco Cones.

Taco cones are one of the latest trends in ice cream. It seems it was made for rolled Ice Cream doesn’t it just fit perfectly in that shell? 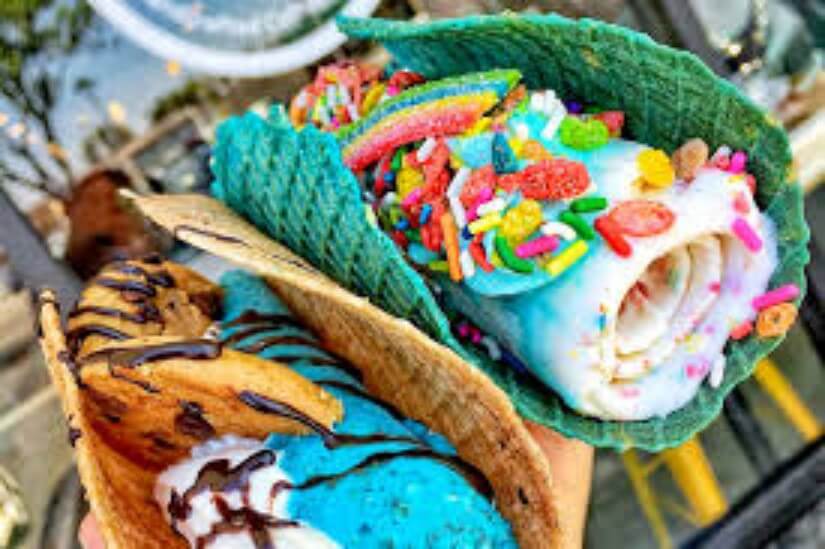 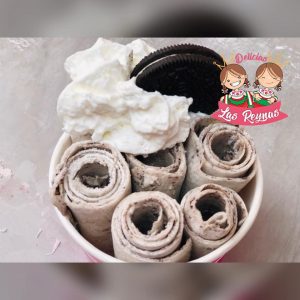 You can stack oodles and oodles of toppings and take your time and eat while it sits comfortably in your hand.

This ingenious design allows for a filling to be placed inside of the “bubbles”They can be filled with chocolate, caramel or peanut butter. The only limit is what the store offers 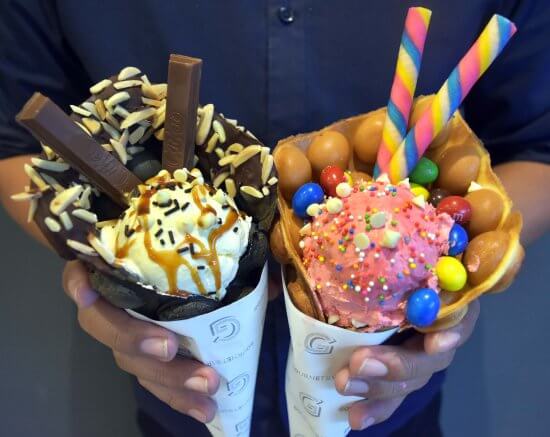 How about Taiyaki/ Fish Waffles

These are a bit different aesthetically because it is shaped like a fish lol.

It gets even weirder there are even poo shaped designs.

Regardless of how they are served, Rolled Ice cream is undoubtedly a wonderful treat.

If you have never had one of these decadent creations please have one today. No stores close by make them at home. No one should miss out on experiencing this.

If you are interested in starting this business then you are at the right place. We provide free consultations and you can schedule a spot here or if its something simple, just shoot us an email.

Here at Roll Ice Cream we only sell quality, from the customer service to the equipment.

You can get a range of  ingredients and toppings at rollicecream.com