Why Ice Cream Is Important

Fewer food products have had such a wide range of appeal, and such a longstanding appeal, as ice cream.

The popularity of ice cream has withstood the test of time, being a greatly-loved treat from generation to generation. The enjoyment of ice cream knows no barriers of age, class, gender, or any of the other factors which often divide and separate people. Ice cream is truly a universal delight almost everyone loves it!

Ice cream itself is not specifically designated as one of the Four Basic Food Groups. While some people, albeit humorously, believe that it should be, ice cream merely takes its place amongst the Dairy Group. The result is that it can then get lost amidst the more basic dairy products, such as plain milk and plain cheese, while there is nothing at all plain about ice cream!

The hasn’t been much change in the way Ice Cream has been served in quite some time. Then in come roll ice cream, the new guy on the block being made on the interesting rolled ice cream makers. Do you know what these are? Keep reading to learn more

Humor aside, ice cream’s place in the food groups is very important, for standard ice cream and its many variations is a very healthy food. Although there are a number of factors to consider in selecting and consuming ice cream, categorizing it along with the other food products in the Dairy Group is wise, for even just the factor of its high calcium content makes ice cream a product which is beneficial to most people’s everyday diets.

Ice cream also has a “community” aspect on a number of different levels. On one of the most personal and memorable ends of the scale, ice cream is a favorite addition to a family dinner. For the many whose meals are not complete without a dessert, family members will certainly state that ice cream is at or at least near the top of their list of favorites.

On the other end of the scale are the larger, community events which include ice cream. Some, for that matter, such as the ice cream socials which are popular in parts of the United States, place the sharing of ice cream as the main focus. Sharing ice cream and interacting with friends and neighbors thus becomes synonymous. 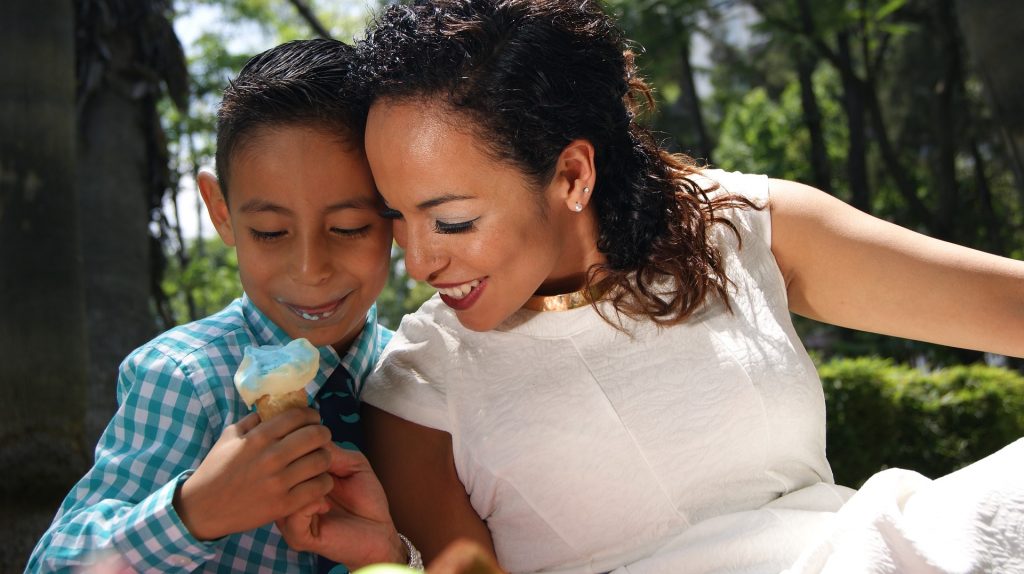 For children and adults

Young and old alike, ice cream can be a special treat.

Whether ice cream is a standard part of everyday life or not, it can also be more meaningful and memorable. Ice cream can be a major part of a party, it can be a reward to yourself or your child for a job or task done well, and in the excessive heat of summer weather it can be a delightful and refreshing way to cool off.

There is something that is not exactly describable in terms other than “very good” about being able to walk into your favorite ice cream shop on a hot summer day and treat yourself to a double-scoop ice cream cone..

Many people also choose ice cream as a favorite “comfort food.” Ice cream is a great way to boost one’s mood when life is at less than its best. Whether one’s preference is to dig into a half-gallon container from one’s freezer, or to go to a local ice cream shop and order something “with everything on it,” there is no comparison to the mood-elevating effects of ice cream.

Ice cream is also one of the basics for simple relaxation. After a long, hard day at work, it is a very positive thing indeed to be able to enjoy a bowl of your favorite ice cream while relaxing in your own home in front of the television set or while reading a good book.

In all of these situations and others, ice cream adds to the enjoyment of everyday situations, and makes what would otherwise be ordinary, to be even better!